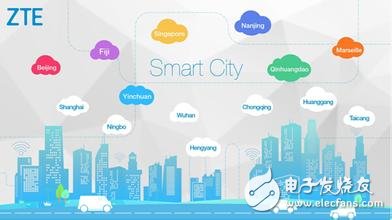 The 1.0 of the smart city is based on the decentralized construction of a single target. The data in this period is scattered; 2.0 realizes the overall planning of the goals, structures and resources in terms of cities, and forms the concentration of big data; It is the operation of big data. Smart City 3.0 adheres to people-oriented, mines data value, realizes the application of big data, and promotes big collaboration and popularization of the society through data crowdsourcing, information open sharing, public service optimization decision, urban smart management and other big data analysis and mining. To achieve the social value of data.

Liu Feng pointed out that the smart city of 1.0 mainly solves the problem of more professional and more meticulous management in the vertical field in various industries and departments. For example, in the transportation field, the traffic control department and the transportation department can solve the problem of traffic control through more technical applications, including RFID and new smart cameras. The 1.0 stage is a sub-system construction, and the main problem is data dispersion. Because the smart city is a complex giant system, there are scattered data, isolated islands of data, and scattered investment. There is no overall planning. So in recent years, many cities have made some bold attempts to make the top of the whole city. Design, distribution and implementation, connecting various industries and systems, data can be opened, data can be fully shared, open and integrated, and all aspects of the entire city can be planned and implemented.

Through continuous exploration and accumulation, ZTE has jointly promoted the planning and construction of Smart City 2.0 with many cities in China on the basis of the original Smart City 1.0. Compared with the decentralized construction model of the single goal of Smart City 1.0, Smart City 2.0 innovatively proposes the technical framework of â€œone cloud, one network and one mapâ€, emphasizing the concentration and interconnection of big data and realizing the goal of city. , planning and resource pooling. With the strong support of Shenyang Municipal Party Committee Government and Shenyang Big Data Bureau, Shenyang Big Data Operation Company and ZTE jointly created the â€œUnified Shenyangâ€ city big data platform, and has completed 430 million data collections of 27 commission offices. Entered, covering the population of the city.

With the continuous improvement of the unified big data platform and the continuous accumulation of data, the construction of smart cities will enter the 3.0 stage. Liu Feng said that ZTE believes that it can solve the deep-seated problems in the process of urban development, thereby realizing the smart management and operation of the city and promoting the harmonious and sustainable growth of the city. ZTE has successfully replicated the Smart City 2.0 model and achieved the concentration of big data, laying a solid foundation for the realization of 3.0.

1. Establish a deeper and wider Internet of Everything

Establish a deeper and wider Internet of Everything, and truly connect every corner of the city. Liu Feng said that nowadays each city has a very thorough connection to the ground, but the underground of the city, especially the underground pipe gallery and every corner, is not satisfactory. The construction of the future urban Internet of Things should make every corner of the city more intelligent. On this basis, the smart city 3.0 with big data as the core can truly provide more refined immersive passive to active services for enterprises, individuals and governments, and ultimately through the establishment of the entire industry ecosystem, not only for The common people provide services that are more convenient, benefiting the people and benefiting the people, and through the provision of services, they can cultivate many companies and enterprises that are doing modern new service industries.

2. Improve the current economic structure of the country and support the country's "new four modernizations"

Smart City 3.0 helps urban industry intelligence, smart industrialization, new urbanization and regional development integration. Liu Feng said that the current smart city construction has entered the third stage, and it is necessary to solve the urban big data operation and industrial upgrading as soon as possible. The measures combine the advantages of local urban characteristic industries, enterprises and cultural resources to achieve innovative breakthroughs in the core links of the value chain, combined with business models. Change, form an industrial cluster; at the same time combine the urban development stage, combined with the urban agglomeration and the Belt and Road, to achieve a new type of urbanization that is livable and suitable.

In the future, based on data-driven whole smart city construction, smart city 3.0 with data operation as the core, we must first solve the protection of citizen privacy protection and national information security in the future.

Finally, Liu Feng said that we hope to achieve real estate integration through Smart City 3.0 and boost economic upgrading. Through connectivity, convergence, ecology and fission, the company has made breakthroughs in three areas: government system reform, new urban form changes, and industrial upgrading. That is to promote administrative supervision and separation of supervision through information means, establish a norm and security guarantee system for the collection, transmission and application of big data in smart cities, establish reform and innovation of system mechanisms such as data opening and exchange standards, and promote the operation of big data. With the service, it promotes the transformation and upgrading of the new business format of the city, and finally forms a larger urban ecological circle.

Usb2.0 is a new interface technology used in the computer field. The USB interface features faster transfer speeds, hot swapping, and connectivity to multiple devices. It has been widely adopted in various external devices.