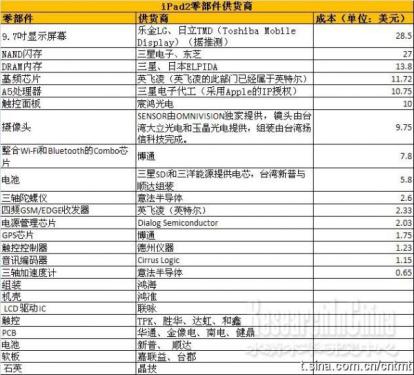 Apple has officially released the second-generation iPad tablet on March 2nd (iPad 2 is officially released, Jobs has said "Let opponents can not reach"), according to official sources, the main changes in the iPad 2 include the use of Apple A5 dual-core processor, the speed is At twice the speed of A4, the speed of graphics can reach nine times that of A4. It is 33% thinner than a generation of iPad, and the weight is reduced by 15%. Two cameras are added: The front is a VGA camera, and the back can shoot 720p HD video. The iPad 2 is available in black and white and can be used on AT&T and Verizon networks.

An iPad 2 BOM list released by the market research organization Shui Qing Muhua (see the following table) shows that the screen portion of the Apple iPad 2 uses the LCD technology of LG and Hitachi TMD; the touch panel is made by Taiwan's Tektronix (TPK). Provided; the core processor still uses products designed by Samsung specifically for Apple; the memory is provided by Samsung and Elpida; the flash memory is stored by Toshiba and Samsung; the wireless module, Bluetooth, and GPS module are all adopted. Broadcom products; baseband chips from Infineon.

According to the consulting firm PRTM, there are a total of 64 companies in the market launching 102 tablet PCs, most of which have begun to look more and more like iPads, and the market has called them "iPad-like. But unfortunately, in addition to the iPad, Almost all existing tablet PCs perform poorly.

Less than a year after the first iPad was released, it sold 15 million units, which accounted for 90% of the world's total tablet sales. In other words, the sales of tablet PCs produced by other manufacturers add up to only 10%. The iPad2's early listing makes Apple's competitors even worse.

Moskowitz believes that although the tablet PC is a hot product in the current market, the tablet PC market is facing a bubble in the second half of 2011 because many manufacturers have flocked to this market in order to compete with the Apple iPad and the companies are expecting excessive sales of their own products. Risk, the specific performance is too much inventory.

He said: "We believe that the improvements in technology and appearance of the iPad 2 make it even more difficult for the iPad to compete with the first-generation products launched by the wind. This means that the actual sales of these products are expected to be much lower than expected."

J. P. Morgan expects tablet production this year to be slightly lower than 65.1 million, but actual sales are expected to be between 43.1 and 57.5 million. J. P. Morgan also believes that Apple will continue to maintain its dominant position in the tablet PC market, which is expected to grow by 100% year over year, with sales of 29 million.

IPad2 is listed less than one year after the first generation of iPad was launched on April 3 last year. In such a short period of time, it launched a new generation of products, demonstrating Appleâ€™s superior control of the entire upstream supply chain. Not only that, but Apple is also proposing to the supplier the amazing target of the total shipment of the iPad series in 2011 to 40 million units!

According to Taiwan's "Electronic Times" report, Apple currently holds more than 60% of the world's capacitive touch screen production capacity - iPad's touch screen is mainly produced by the Taiwanese manufacturers Qi Hong and Sheng Hua, and most of their products are packaged by Apple.

Apple has hoarded 60% of the world's touch screen production in 2011, including 40 million iPad display screens. Most of the screens come from Wintek and TPK.

Just a few weeks earlier, the market suddenly reported that Apple was signing a $7.8 billion component supply order with Samsung. Samsung is the most important component supplier of iPad2: Samsung will provide GPU, random access memory (RAM), Nand-flash memory and other components to iPad2.

This once made Apple's competitors feel very nervous, because in the past Apple had repeatedly thrown similar purchase orders, the short-term capacity of some key components of the market buyout, leading to global shortage.

In 2005, Apple had set a long-term supply contract for fast flash memory chips to Samsung and Hynix at a price of US$1.25 billion under the leadership of COO Cook to ensure Appleâ€™s supply of this key component. When Apple's competitors have launched similar products, their production capacity has already been purchased by Apple. This supply contract has largely laid the foundation for the success of the iPhone and iPad, and it has made it difficult for competitors to introduce similar products in the short term.

As a result, the tablet PCs of other manufacturers on the market either lacked components and could not be shipped in large quantities, or the prices of components and shipments kept rising.

The dominance of Apple's family has been very difficult to change, and its ability to control the world's production capacity has directly inhibited the development progress and yields of other manufacturers' products. Nowadays, tablet PCs lack the most raw materials for touch screens, displays, CPUs, and high-end flash memory. Wait.

The shortage of upstream raw materials has also caused a large number of upstream manufacturers to join in the manufacturing of tablet-related parts. Taking the touch screen as an example, only a large number of manufacturers in China have announced the production of capacitive touch screens, but due to manufacturing process problems, these factories have It takes at least six months to a year before the yield can be raised to a reasonable level â€“ the yield of a touch screen production line is less than 80%.

Regrettably, Apple's iPad3 is already on the market as the capacity and quality of these chasers are up.